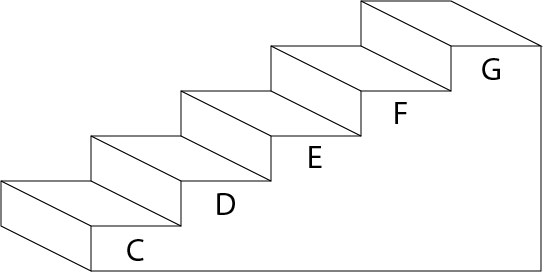 When we move from one note to the next in a scale, it is called a step. As we mentioned before, the major scale can be thought of as a ruler. Unlike an ordinary ruler, however, the elements of a major scale are not evenly spaced. There are two sizes of steps called a half step and a whole step. A half step is the smallest unit in our musical system. It is the distance from one note to the nearest neighboring note. On the piano it is usually the distance from a white key to the nearest adjacent black key. On the guitar, it is the distance from one fret to the neighboring fret. A whole step, on the other hand, is twice as large and is equal to two half steps.

The C major scale is created by starting on C and following the pattern whole whole half, whole whole whole half. Notice that most of the notes are separated by a whole step, except between E/F, and B/C where you find half steps.

This pattern is so fundamental to Western music that it is literally built in to the structure of the piano and many other instruments. If at any time you forget the pattern of half steps and whole steps, simply look at the piano keyboard. The places where you don’t see a black key are where the half steps are located.

Now we can see that the half steps are between 3/4 and 7/8. Each number is called a scale degree. This simply indicates what number note it is in the scale. The distance between any two scale degrees is called an interval. If the major scale can be thought of as a musical ruler, then intervals can be thought of as musical inches. The term interval will be used again and again throughout this book.

In the workbook, please fill out the worksheet entitled Notes in Every Key.

This site uses Akismet to reduce spam. Learn how your comment data is processed.